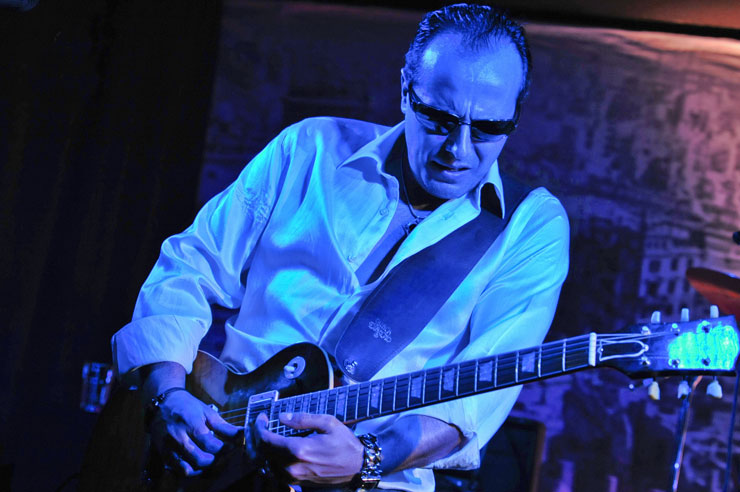 JIMI BARBIANI BAND is the new project by Jimi, one of the best rock-blues slide guitarist in Europe. The JIMI BARBIANI BAND is an alchemy of influences from artists such as Hendrix, Joe Bonamassa, Jeff Beck, Free, Gov’t Mule. The explosive sound of the JBB POWER TRIO is best conveyed in live performances, where the heterogeneity of the show and its mounting impact emphasize the personality of each member of the band, allowing them to span from the long-jam ride to the most passionate blues-rock, ever creating a unique sound.

He co-operated: with Johnny Neel, keyboard-player of the Allman Brothers Band and Gov’t Mule.

Jimi Barbiani played at the most important festivals and clubs in Italy and Europe:
Pistoia Blues 2003/2005/2007, Castel San Pietro in Blues 2007, Big Mama, Atri blues, Vallemaggia Blues, Burg Herzberg (Deutschland) 2005/2011, whose concert was filmed by the Rockpalast and one of the songs was included in the DVD of the 2005 Festival, Ameno Blues, Nistoc Festival, Woodstock Festival (Italy), Blues Garage (Deutschland), Blues Garaasj (Nederland), Spirit of 66 (Belgium), Blues Hideaway Nashville (USA) and more...

Jimi, just like the left handed guitar legend, plays from his soul, with a style reminiscent of Muddy Waters and his deep vibrato and a slide expertise that reminds of Duane Allman.
Always with good feelings, Jimi’s mood style blends technical ability and deep instinct.
His music is inspired by the crowd as he plays for all the people who enjoy the spell of classic sounds as well as the raving rock-blues energy.
With his eyes closed, Jimi becomes one with the stage, playing with an absorbing energy that leads the public, the musicians and himself to a sort of collective trance.

"In the U.S.A. Jimi Barbiani would be in great demand as a guitarist... he is warm, subtle and rigorous, according to Jimi Hendrix manner, he is a first-class guitar player"
(Mauro Zambellini – Buscadero)

"...the guitarist is the absolute leader of the stage, with an extemporized steady inspiration flow and an excellent slide ability…losing nothing in comparison with the most titled world-famous guitarists."
(Riccardo Capelli - Chitarre)